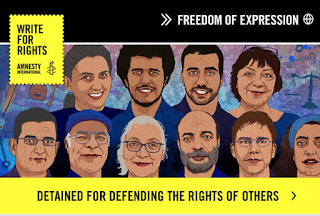 
10 people who have dedicated their lives to defending the human rights of journalists and activists in Turkey are themselves in danger.

Among them are Amnesty International’s İdil Eser and Özlem Dalkıran of Avaaz. Known as the Istanbul 10, they were detained in July for “aiding a terrorist organization” – a preposterous allegation.

Their detention followed the arrest of Amnesty Turkey’s Chair Taner Kılıç, imprisoned since June on the absurd charge of being a member of an “armed terrorist organization”.

These detentions are the latest in a series of government efforts to silence its critics. Since the attempted coup of July 2016, over 150,000 people have been placed under criminal investigation.

The Istanbul 10 have dedicated their lives to bravely defending the rights of vulnerable people around the globe. Every day that they are detained, the people they speak up for are left more vulnerable to the government’s ongoing crackdown on freedoms.

Join our call on the Turkish authorities to stop persecuting and immediately release rights defenders.
CLICK HERE to TAKE ACTION
Posted by Melody Scherubel at 1:28 PM