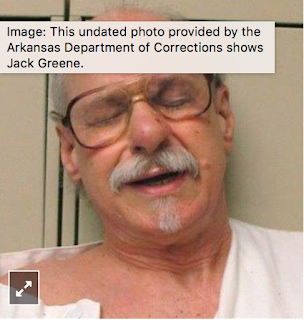 
Jack Greene, aged 62, is scheduled to be executed in Arkansas on 9 November. His lawyers assert his execution would be unconstitutional because he has a psychotic disorder preventing him from having a rational understanding of his punishment.

Jack Greene was convicted in 1992 of the 1991 murder of Sidney Burnett. Experts have diagnosed him with a psychotic disorder, including delusional beliefs of a conspiracy between his lawyers and the state. His lawyers say his mental disability has worsened since 2004...According to his lawyers, he has spent the past 14 years “in almost constant isolation, rarely leaving his cell, even for attorney visits”.


CLICK HERE to TAKE ACTION
Posted by Melody Scherubel at 8:12 AM