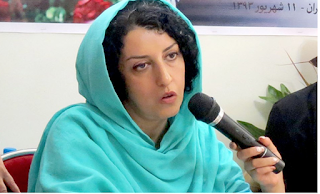 Photo at left of Narges Mohammadi, activist imprisoned for her work against the death penalty.


On 10 October, people around the world marked the World Day against the Death Penalty. This year is particularly significant for us at Amnesty International because it marks 40 years since the organization first began campaigning for the worldwide abolition of the death penalty in 1977.

...As of September 2017, more than two-thirds of the countries around the world have abolished the death penalty in law or practice.

However, as the world moves away from the death penalty, Iran continues to execute hundreds of people every year.  Amnesty International recorded nearly 1,000 executions in Iran in 2015 and at least 567 in 2016.

The Iranian authorities’ dogged commitment to this cruel and irreversible punishment is widely known but what is perhaps less well-known is the story of the growing domestic movement against the death penalty in Iran and the brave human rights defenders at the heart of this movement.

These men and women struggle against all odds to bring their country in line with international human rights law and standards on the death penalty and realise their vision for a humane society in which there is no place for the death penalty.

In 2013, several prominent Iranian human rights defenders launched the Campaign for Step by Step Abolition of the Death Penalty, known by its Persian acronym, Legam. In response, the authorities have intensified their repression against their work.

Posted by Melody Scherubel at 3:54 PM