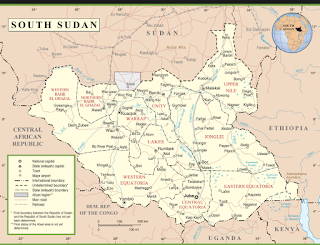 Fifteen of the 21 detainees that Amnesty International had campaigned on in previous urgent actions were released from NSS prison without charge on 10 August. Some of the men had been in arbitrary detention for close to two years.
Tartisio Oshini, Ayume Dada, Lado James, Ochaya Godfrey Saverio and William Endley remain arbitrarily detained at the NSS headquarters, while James Gatdet has been charged with: inciting violence – ‘Abetment’ (article 52), ‘Treason’ (article 64), ‘Publishing or Communicating False Statements Prejudicial to Southern Sudan’ (article 75), and ‘Undermining Authority of or Insulting President’ (article 76) under the South Sudan Penal Code of 2008.


There are concerns for the physical and mental health of these detainees, most of whom continue to be accused of communicating with or supporting the opposition, but have not been charged with any offence. They have been denied the right to be brought promptly before a judge and the right to challenge the lawfulness of their detention.
CLICK HERE to TAKE ACTION
Posted by Melody Scherubel at 12:16 PM