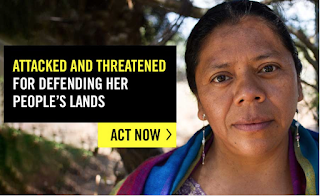 Attacked and threatened for defending her people’s ancestral lands from logging in Guatemala, Aura Lolita Chávez now fears for her life.

Last month at least 10 armed men attacked Lolita and a number of other women, after they handed a potentially illegal logging truck over to the authorities.

These women have a right to protect their lands; they must be able to carry out their peaceful work in safety and without fear.

Lolita is the Indigenous leader of the K’iche People’s Council (CPK), who work tirelessly to protect their traditional lands from mining, logging and hydroelectric interests.

Indigenous women in Guatemala who speak out against powerful companies face enormous risks in the course of their work in seeking justice when their rights are violated.  But, just last year seven Guatemalan environmental defenders facing charges for non-violent protests against hydroelectric projects were released after global pressure from people like you.


CLICK HERE to TAKE ACTION
Posted by Melody Scherubel at 8:11 AM