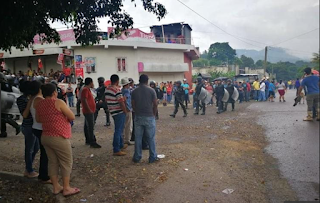 People peacefully protesting against a mining project in Casillas, Guatemala, and by-standers including elders and children were tear gassed and dispersed by riot police on 22 June. Some children were intoxicated and had to be evacuated. Four protesters were detained during the operation and released later that day without charges.
There are concerns of further excessive use of force as police presence continues in the community.

Amnesty International contacted an officer at the Vice Ministry of Security who told the organization that they have not yet received any information regarding the events in Casillas on 22 June.

International organizations and protestors have expressed concern that excessive use of police force may continue, as four police patrols were seen in the community on the afternoon of 23 June.


CLICK HERE to TAKE ACTION
Posted by Melody Scherubel at 8:28 AM