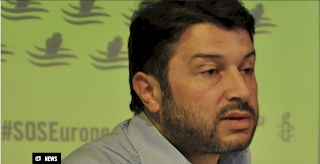 Taner Kiliç became the latest victim of the government’s sweeping purge after he was detained in the early hours of Tuesday on suspicion of involvement with the Fethullah Gülen movement, together with 22 other lawyers based in Izmir.

At his court hearing in the western Turkish city today, he was charged with membership of the “Fethullah Gülen Terrorist Organisation” and remanded in pre-trial detention. Amnesty International is demanding his immediate and unconditional release.

“Taner Kiliç is a principled and passionate human rights defender. The charges brought against him today are completely without merit. They show just how arbitrary, just how sweeping, the Turkish government’s frenzied pursuit of its perceived enemies and critics has become. He must be released immediately and the charges against him dropped,” said Salil Shetty, Amnesty International’s Secretary General.

“Taner’s arrest highlights not just a disregard for human rights, but a desire to target those who defend them. We are calling on all those in Turkey and around the world who care about human rights to speak up for a courageous campaigner who has dedicated his life and now sacrificed his liberty in their cause.”