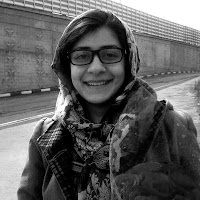 Journalism is Not a Crime
Zahra Khandan was arrested at her house on Monday January 19, 2015 by the cyber unit of the Revolutionary Guards. It is thought she was taken to Ward 2A of Evin Prison, which is controlled by the Revolutionary Guards. Khandan began working as a women’s rights activist when she was a student at the Sharif University of Technology. At the time of writing, there had been no contact between her and her family. However security forces did call to tell her family that the arrest had happened but giving no information pertaining to her whereabouts or the charges against her.

Click here for the ENTIRE article.
Posted by dknit at 9:14 AM