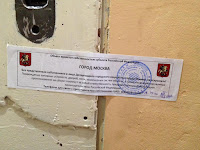 Independent
November 2, 2016
An Amnesty spokesperson told The Independent staff had arrived at work this morning to find the office doors sealed, the locks removed, the electricity cut off and the alarm system de-activated.
Attached to the door was a notice apparently from Moscow city authorities, from whom Amnesty rent the building, saying no one could enter the office without being accompanied by a Russian official. The premises was "property of a city of the Russian Federation", the note said.
The Moscow city government, from which Amnesty leased the premises in central Moscow, said the group was behind on the rent, but Amnesty said it had documents to prove it was up to date with payments.